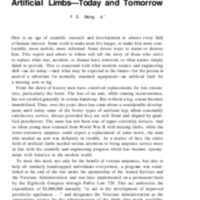 Ours is an age of scientific research and development in almost every field of human interest. Some work to make man live longer, to make him more comfortable, more mobile, more informed. Some devise ways to maim or destroy him. This report and others to follow will tell the story of those who strive to replace what war, accident, or disease have removed, or what nature simply failed to provide. This is concerned with what modern science and engineering skill can do today-and what may be expected in the future-for the person in need of a substitute for normally standard equipment-an artificial limb for a missing arm or leg.

From the dawn of history men have contrived replacements for lost extremities, particularly the lower. The loss of an arm, while causing inconvenience, has not resulted generally in serious handicap. But without a leg, a man becomes immobilized. Thus, over the years there has come about a considerable development until today some of the better types of artificial legs afford reasonably satisfactory service, always provided they are well fitted and aligned by qualified prosthetists. The same has not been true of upper-extremity devices. And so when young men returned from World War II with missing limbs, while the lower-extremity amputee could expect a replacement of some merit, the man who needed an arm was definitely in trouble. As a matter of fact, the entire field of artificial limbs needed serious attention to bring amputee service more in line with the scientific and engineering progress which has become synonymous with America in the modern world.

To meet this need, not only for the benefit of veteran amputees, but also to help all similarly handicapped individuals everywhere, a program was established at the end of the war under the sponsorship of the Armed Services and the Veterans Administration and was later implemented on a permanent basis by the Eightieth Congress through Public Law 729. This act authorizes the expenditure of $1,000,000 annually "to aid in the development of improved prosthetic appliances ..." and designates the Veterans Administration as the appropriate agency for the administration of the funds thus made available.

The activities encompassed within the framework of these endeavors have come to be known as the Artificial Limb Program. And since the field, though serving less than a million persons, of whom only some 27,000 are veterans, involves the cooperation of several scientific disciplines as well as various organizations both civil and military, a special structure had to be contrived for successful operation. This was done through a contract between the Veterans Administration and the National Academy of Sciences, by means of which an Advisory Committee on Artificial Limbs of the National Research Council has been established for general supervision and coordination, and through other contracts between the Veterans Administration and various educational and industrial organizations for research and development. In addition the Surgeons-General of the Army, Navy, and Air Force, and the Chief Medical Director of the Veterans Administration, have made available the services of certain laboratories and personnel in further support of the over-all program. While in the early stages of this undertaking, it was necessary to proceed generally on a broad front in order to explore and define the complete problem so that at one time as many as sixteen contracts were in force, at present the number has been reduced to three only, and an operational structure has been evolved through which a long-range plan can be followed with reasonable hope of success

The word "prosthetics" has been found a convenient term to define the general field of amputee service. Since the problems of replacement in the lower extremity are quite different from those in the upper, the field is divided into two parts. Lower-extremity research and development are centered at the University of California, Berkeley Campus, while upper-extremity studies are similarly covered at the University of California at Los Angeles, all under a contract between the Veterans Administration and the University. Assisting in lower extremities is the Oakland Naval Hospital Artificial Limb Department while the Army Prosthetics Research Laboratory at Walter Reed Army Medical Center cooperates in the development of artificial arms and terminal devices Finally, through a contract with New York University, and with the cooperation of the VA Prosthetic Testing and Development Laboratory in New York well-defined methods of testing and field application assure that devices and techniques developed under the program are, before acceptance, in fact useful improvements in amputee rehabilitation.

For general technical guidance in these two branches, standing committees, in lower- and upper-extremity prosthetics respectively, have been constituted, each composed of specialists in the fields of medicine, engineering, prosthetics, and the like, and each under the chairmanship of the leader of the appropriate University of California research project. These groups meet annually, or more frequently if necessary, to review progress, define requirements, and recommend action to the Advisory Committee on Artificial Limbs, to the artificial-limb industry, or to others interested in amputee rehabilitation problems. In addition smaller research and development panels have been appointed from these technical committees to supervise current activities between meetings of the larger groups. In this work, definite transition procedures have been adopted for orderly progress from the inception of ideas for improved devices and techniques to their final application in the limbshop or rehabilitation clinic.

By these methods the results of some eight years of research and development are now being channeled as directly as practicable to the service of amputees, rather than indirectly merely through the issuance of reports or through publication in scientific journals. In order that physicians, prosthetists, rehabilitation specialists, insurance carriers, and other interested individuals and organizations may be informed of advances in this field as promptly as possible, this series of reports is being undertaken. While the Advisory Committee on Artificial Limbs has previously issued monthly progress reports on a limited basis to those immediately concerned, and although the various contractors and governmental laboratories associated with the program have contributed reports and other data on specific subjects, this will be the first organized attempt to disseminate timely information to a broad list of individuals and institutions interested in the rehabilitation of the amputee. This is being done in furtherance of the intent of the Congress which, in Public Law 729, authorizes the Administrator of Veterans' Affairs "to make available the results of his investigations to private or public institutions or agencies and to individuals in order that the unique investigative materials and research data in the possession of the Government may result in improved prosthetic appliances for all disabled persons."

In offering these reports to the reader who has not been in a position to follow recent progress in this field as unfolded through the Artificial Limb Program it can be stated that the views and information to be set forth in this and Subsequent issues are the result of long and objective study by specialists in the various branches of science and engineering involved. These findings, therefore, can be accepted with considerable confidence as indications not only of the present state of the art but also as to future trends And where these findings may appear at variance with previous traditional concepts or the writings of earlier authorities, it can be said simply that the field of prosthetics is even today largely uncharted and untraversed-that it is a field where the marvels of modern science and engineering have yet to leave their mark.